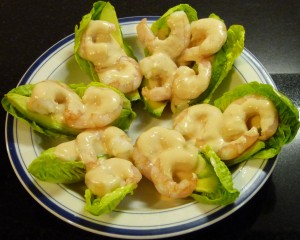 Back in the 1970s, the dawn of dining out, the prawn cocktail ruled supreme as the starter of choice and remained so well into the 1980s.  In terms of getting a meal off the ground (perhaps not a great analogy!) a well-presented prawn cocktail absolutely looked the part, and set the taste buds tingling in a way that few other starters did in readiness for the next course.

It was in the early 80s that I stated making my own cocktail  (or 1,000 Island?) sauce, and indeed made it so often that my little daughter referred to it (and still does, although not so little these days) simply as ‘Daddy’s Sauce’.  I recall one occasion discussing for ages with a colleague exactly how much lemon juice there should or should not be in it, such was its hold.  The prawn cocktail was a significant part of almost any dining experience, and indeed of life itself.

And then suddenly it wasn’t!  As dining out became something people did more regularly for leisure rather than to celebrate a special occasion, and many more restaurants opened offering what seemed like an infinity of clever dining ideas, so the prawn cocktail (along with the Black Forest Gateau, Steak Diane, etc.) started to feel very passée and old-fashioned.

Asking for one began to make one feel a bit oikish.  It may be that the people who used to enjoy them now hankered after more exotic foods like Thai, Cajun or Indian. I’m sure the PC remained on the menus of older establishments, but new, trendy restaurants wouldn’t be seen dead offering one.

But then in 1997 I came across this book

filled with recipes for all the old favourites, and I realised that I hadn’t had a prawn cocktail in nearly a decade and it was like rediscovering an old friend.  I updated my recipe  and started making them again (although seldom order one in a restaurant – mine are just so much better) and now, nearly 20 years later, they’re still a firm favourite . . . . .

. . .and so versatile.  Yes, you can still serve them individually as a starter, but the components served on a little gem lettuce leaf (as above) makes a terrific cocktail party canapé, or stick the whole lot in a big bowl for a wonderful summer salad.

The sauce recipe I use now is based on Delia Smith’s but the quantities vary from batch to batch making each one a new experience.  It’s also because of Delia that I include avocado and once you start doing that, you’ll wonder how you ever managed without it.

It was my birthday yesterday and I could think of nothing I fancied more as a starter (home-made of course) than a mouth-wateringly marvellous prawn cocktail – the King of starters.