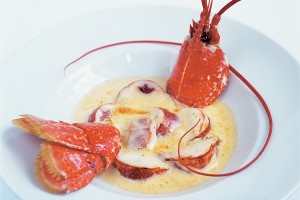 First of all sincere apologies to Michel Roux for daring to refer to his critically acclaimed culinary creations as mere ‘nosh’; I wish to be excused on grounds of artistic licence – what else could I rhyme with Gavroche in the same way?

Most people that know me would be well aware that I do not care much for what is often referred to as ‘fine dining’, in which the presentation of food appears to cost more than its preparation,  finding such restaurants somewhat pretentious and generally hugely over-priced.

While I watch a great many cookery programs on TV,  I am unimpressed by offerings of the ‘Masterchef’ variety – I would much rather watch a Bangladeshi housewife making a curry at home than a Michelin-starred chef making anything in the finest kitchen – I just feel there’s more point in it.

So what, one might ask,  was I doing last Tuesday having lunch in Le Gavroche, potentially the finest dining in London?   Well, actually, I was having a thoroughly good time, enormously enjoying the eating, and positively wallowing in the atmosphere.

I’d been there before but not for many years and had always liked it, considering it one of my favourite restaurants, albeit one not often visited.  I can’t quite remember the context but it came up in conversation towards the end of last year and unbeknownst to me, a table had been booked for my birthday.

Unfortunately (or from the restaurant’s point of view, fortunately) , it seems that I am not alone in liking it because there is a 3 month waiting list for a lunchtime table, which meant it was early February before we could have a table to celebrate my January birthday.

As we sat at our table, for most of an hour there were very few other patrons in evidence and we wondered whether the ‘waiting list’ was a bit of a con, but in fact by about 2pm the whole placed was buzzing and we realised that allocation of tables is phased over the entire lunch period so that each individual gets the full treatment, and that  no-one is rushed or neglected in any way – clever!

Set lunchtime menu is £56 which includes ½ bottle of house wine.   What you get for that is a veritable army of staff fussing around after you, servers in suits, sommeliers with black aprons, ‘fetch-and-carry’ waiters (somewhat oddly in white dinner jackets, possibly a form of classy hi-viz to stop everyone else bumping into them) who bring food to the table on enormous silver salvers, to be served up by the servers, etc.  Everyone is hugely attentive almost, but never quite, to a fault. 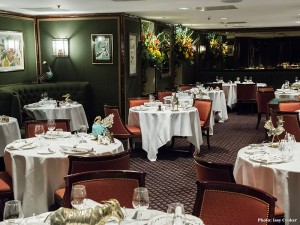 The dining room is very spacious, unlike the nouvelle-riche fine-dining establishments who seem to cram in as many tables as physically possible with the result that one could join in any number of other conversations if one so chose.  Table was large and uncluttered making the experience very comfortable. 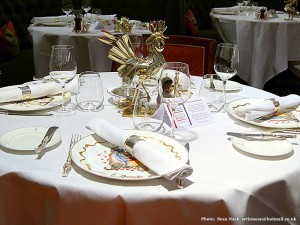 Crockery and cutlery are very pretty but possibly a little fussy, nay ostentatious, for my liking, but hey, you can’t have it all your own way. 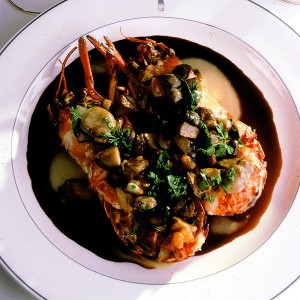 The food is beautiful and utterly delicious but individually the dishes are tiny but there are lots of them and I can’t believe how full I felt when I got to the end of it all.

And when it was all over, as is common in French restaurants, we had a brief visit from the chef de cuisine, who turned out to be none other than Michel Roux himself, and who I would have thought far too busy doing other things to simply cook or otherwise run a restaurant, so I take my hat off to him for that. 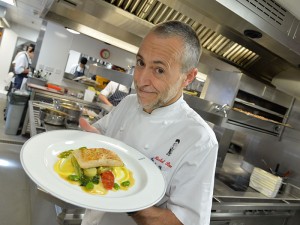 So what is it about Le Gavroche that ticks so many boxes for me while so many other what might be termed ‘posh’ restaurants do not even get close?

To find out, I found myself analysing what it is, on the comparatively rare occasions that I eat out,  that I like in a restaurant, and that is, unpretentious, high quality, honest-to-goodness food from any number of ethnicities such as Italian, Spanish, Greek/Turkish/North African, Indian, Chinese, etc. and that includes French, and what they do in Le Gavroche is the finest French food, served in the finest way imaginable – what’s not to like?