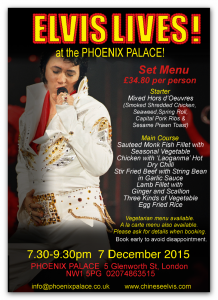 Did you realise that Elvis is an anagram of Lives?

One is always on the lookout for something special/different  to do on a loved one’s birthday – it doesn’t have to be vastly expensive or luxurious, just ‘different’ can be enough – and last year for her birthday I thought I’d take her to one of my favourite Chinese restaurants, Phoenix Palace near Baker Street, which I knew she had not tried.

I use to travel on business to Hong Kong regularly and liked the style of restaurant there, and the Phoenix Palace is as close to that ideal as I have ever found in the UK.

So when I went on to their website to check opening times, imagine my surprise to find they had an ‘event’ very close to Christine’s birthday and said event featured none other than someone called Chinese Elvis.

Now, if I said Christine is partial to a bit of Elvis (and I shan’t say which bit!), that would be understatement of the highest order.  So the combination of excellent food and wine against an Elvis backdrop seemed perfect, so off we went and had a wonderful evening.

This year, it seemed a bit of a no-brainer to try the same formula again and  Yes indeed, Chinese Elvis at Phoenix Palace 7 December – job done with a nice table for two booked.

Seated at our table, we opted to eat immediately so we could enjoy the show (while others chose to eat later).  We had also opted for the set menu (listed above on the advert) although  à la carte was also available as either an alternative or supplement to the set menu.  The food was, as always both excellent and plentiful.

In due course, at the appointed hour, our entertainer made his entrance to a great Elvisian fanfare and rapturous applause.  Before he began his performance, he went round the room introducing a few celebrities who were present.  These were, in the main, Chinese film actresses but to our intense surprise, we found that we were seated right next to the table of none other than the Grande Dame of both the ‘Carry On’ films and ‘Eastenders’, Barbara Windsor, who stood, like her Chinese counterparts before her, to take a little bow.

Chinese Elvis ran through his repertoire of ballads in the first half of the show, as he said, to let people eat their meal in peace, and then departed to get himself ready for the second half/finale.  At this point, Christine turned round and spoke to Miss Windsor who was seated right behind her, whereupon said lady got up from her seat and, to my amazement and delight, came and sat next to me.  We chatted for a good ten minutes about the Carry On films (a personal favourite of mine) and the actors who featured in them, after which Barbara went to meet the rest of her waiting public.

Chinese Elvis then strutted his stuff again, this time with some of the meatier Elvis hits which induced a number of guests to dance in the aisles.  As he himself readily admits in his act, he’s far from the greatest Elvis impersonator (and as he quips, “The more you drink, the better I get!”) but he is a terrific entertainer who knows well how to involve an audience.

So between us, we had a wonderful evening and not surprisingly, find ourselves very much looking forward to next year.