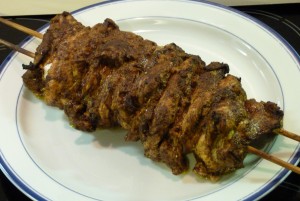 I saw Chicken Shawarma being made on a TV program a couple of years ago and ‘stockpiled’ it for future use, as I thought it looked very interesting, very tempting and very ME.

Finally got round to making it a couple of weeks ago but forgot to take photos!  A friend was having a party last night and a Chicken Shawarma seemed to fit the bill so had another go.

Chicken Shawarma is, dare I say it, a bit like a chicken-based Doner Kebab – the reason I say it in that way is that for some people, the mere mention of the word ‘Doner’ would be a total turn-off.  Well, please don’t let it as this chicken variant is absolutely delicious and light years away from most people’s idea of the fatty, sloppy mess that is the average Doner.

First of all, it’s only similar to a Doner in that while it is made horizontally, it is cut vertically (or even made vertically and cut horizontally!).  Secondly, it is made with lean chicken so not really possible for over much fat to get into it, and thirdly – actually I can’t think of a third thing but may do at some point in the future!

It is made with boned chicken thighs.  It could be made with chicken breasts  but they just don’t work as well as thighs.  Thighs actually have more flavour and in fact, once boned and cooked, it would be difficult to tell them from breast.

One can buy boned thighs but they cost about twice as much as unboned thighs so there is a good cost justification for doing it oneself.  What I like to use for this are the ‘Jumbo Thighs’ available in Asda – not sure what size of chickens they come from but I wouldn’t want to meet one on a dark night!

Boning chicken thighs is not difficult – just a routine chore that needs to be done.  It gets quicker with practice so that in time each thigh will only take a couple of minutes.  Most of the time I keep the bones and ‘bits’ to boil for stock as I don’t like waste.

First prerequisite as with all such jobs is a sharp, smooth-bladed knife.  If you are the type who regularly hacks at meat with a blunt bread-knife, then this is not for you.  Using sharp knives is so much safer – you use a lot less force and it is more controllable: downside is of course that if you are unfortunate to cut yourself, it’s going to be bad!

I sometimes wear rubber gloves to do this as the hands will get covered in raw chicken  and will need to be washed thoroughly afterwards before touching anything else, particularly if it is not to be cooked (like a salad).  The hands must be washed even if using rubber gloves but not such an issue as when no gloves used. 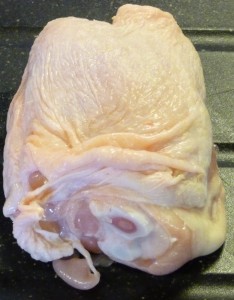 Lay the chicken thigh as shown with the cut bone nearest to you and the rounded one away, 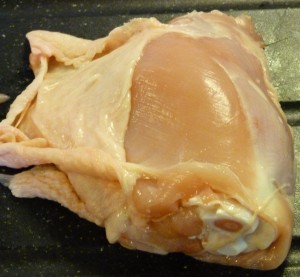 Squeeze your fingers under the skin and separate it from the flesh.  When the skin is released take hold of it and pull so that it comes away completely.  Cut away any residual strips of fat. 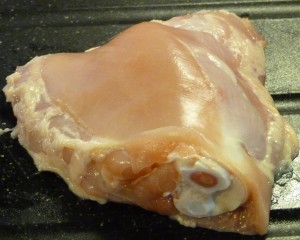 Cut round the bone in one direction and then in the other.  Use the tip of the knife to cut round the back of the bone so it is completely detached from the flesh. 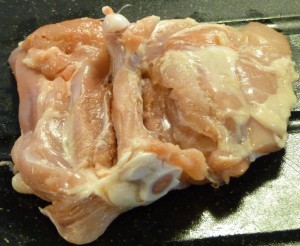 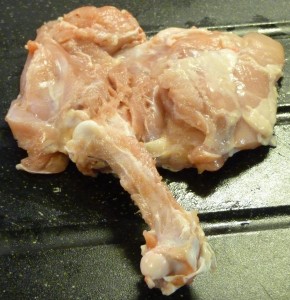 Again use the tip of the knife to cut round the remaining bit of bone, taking care to also detach and remove the white kneecap-like part with all its various attached tendons/ligaments, etc. 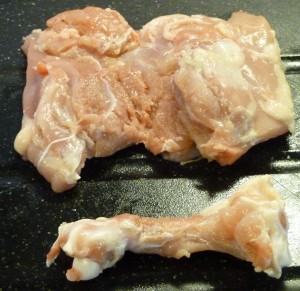 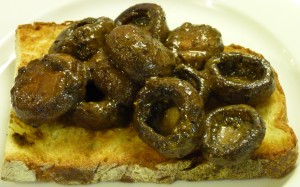 Something I’m very partial to for breakfast is devilled kidneys.  Now kidneys are a marmitey  sort of food in that one either loves them or hates them!

However, much as it feels good to evangelise about things one eats that are not universally popular, one has to exercise care because in some cases, e.g. with, say, kidneys, success might turn a cheap delicacy into an expensive one if  demand rose significantly, so I am very happy for lots of people to turn their noses up at kidneys because that makes them eminently affordable for me!

The term ‘devilled’ is used for recipes where normally ‘tame’ ingredients are given a spicy kick, with the addition of mustard or hot sauce or, at times, both.

Quite apart from my predilection for kidneys, I am also passionate about the sauce that causes them to be called ‘devilled’ and a couple of weeks ago while indulging this passion at breakfast one morning, I suddenly thought it would be fun to try to prepare something else in the same way, and as I looked at the little rounded kidney morsels sitting on the toast on my plate, I was somehow reminded of mushrooms and then thought that they would lend themselves to this style of cooking very well.

A few days later, I served devilled mushrooms as a starter at a dinner party to universal acclaim with instant demands for the recipe. so job done, I guess.

Try this with mushrooms – and you need reasonably sized ones since, as I’m sure you will know, they can shrink considerably on cooking.  You need to end up with about half a dozen mushrooms per person.

But once you’ve decided that you like this dish, try adding the extra ‘frisson’ of making it with kidneys, which somewhat intensify the flavour.

So having succeeded in removing the bone from your leg of lamb, the issue becomes ‘What to do with it?’

Now first off, the meat could just be chopped into cubes and used for a variety of lamb-based dishes – much cheaper (and probably better) than ready-bought meat chunks which will probably cost at least twice as much per kilo.

Or one could take it to Australia, stand by a barbecue,  and wait for Christmas.

Or follow these recipes for a glorious, unctuous Moroccan feast.

Now, I am no expert on Moroccan food.  I did go there once, touring round the country on a kind of safari in an ex-military desert truck, but so long ago that I can barely recall the occasion, and w-a-y before I had my present fascination with things culinary.

But whether my ‘Feast’ is truly representative of Moroccan cuisine or not, it’s very good, nutritious, enjoyable and wholesome, and oddly enough for a hot country, rather more reminiscent of our wintry ‘comfort’ food than anything summery. 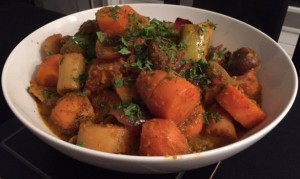 The tagine may be made with any appropriate vegetables – the one pictured above has sweet potatoes rather than ‘normal’ ones and that worked really well. 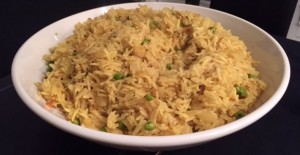 While I often make a Kashmiri pilao rice, this was the first time I had made this Moroccan variation and it is delicious – I found myself just having it on its own, spoonful after spoonful, hot or cold.  I love it!

I cheated on starters, buying hummus and the like from a supermarket but sometime soon I shall tell how to make really lovely Moroccan appetisers, so stick around.

For many people roast leg of lamb is the favourite meat, but carving one of these can be tricky and sot he prospect of a joint of lamb ‘sans’ bone is very attractive.  Now it may be that one wants the bone out just because it makes carving easier or, as here, because it will cook quicker and easier as a flat piece of meat than a round bone-filled one.

I remember on a visit to Australia a few years ago that butterflied leg of lamb was almost ‘de rigueur’ for the ‘barbie’ on Christmas Day so very popular.

If one has access to a decent butcher, it can be done for you at nominal or no cost, but boning a joint of lamb is probably beyond the average meat-counter assistant in a supermarket.  In any case it is not difficult and is quite satisfying (in a smug-making sort of way).

First prerequisite as in all things butchery is a sharp knife.  For this the blade should be neither too long nor too thick – a filleting knife is perfect but any thin-bladed knife will do as long as it is sharp.

Do not even attempt this if you do not have such a knife and if you do have a go, PLEASE mind your fingers – before you start cutting round the back of a bone please be sure you don’t have any part of your hand in the way.

First step is to locate the bone and then press the tip of the knife into the flesh somewhere along the line of the bone. 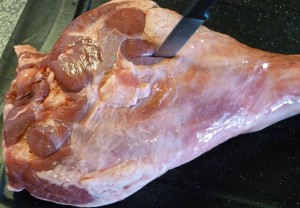 Cut along the line of the bone through to the bone, up and down to make a great cleft, thus: 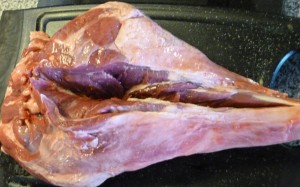 With the tip of he knife cut into the cleft round the top part of the bone (in the thick part of the joint) so that it comes free and looks a bit like the handle of a flintlock pistol. 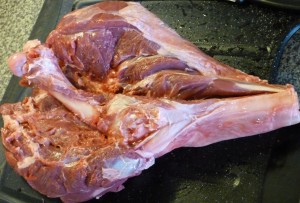 That’s the easy bit but should give encouragement for the rest.

Now cut round the bone at the other(narrow) end of the joint so that the bone is now only attached in the middle. 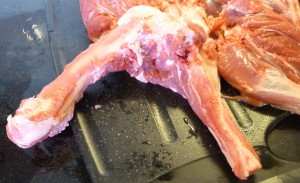 Now cut round the middle part which is effectively a knee joint – it’s a bit fiddly but not difficult.  Take care to cut away the knee-cap as well. 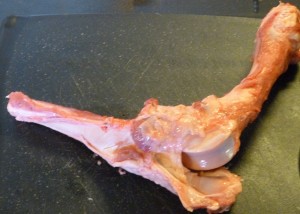 Once the bone is out, the joint looks  like this: 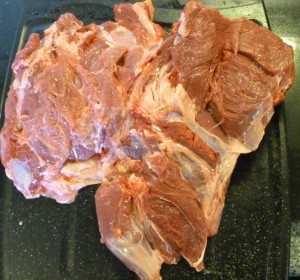 Slice into any thick part and open it out to create as flat  and uniform a slab of meat as possible.  The more uniform it is, the better it will cook.

If you’ve got this far you deserve a drink!