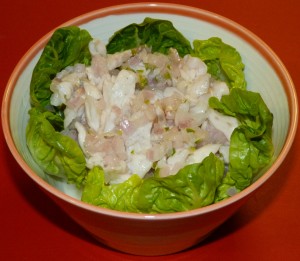 just before Christmas we were going to a Gaucho restaurant for a family celebration and on looking at the menu online, a dish called Tuna Ceviche was spotted bringing the inevitable question, “What’s Ceviche?” (pronounced ceh-vee-chay – a bit like a sneeze!)

Now, having been to Panama on business on a number of occasions, I knew the answer to that question, which is that it’s a highly delicious way of preparing fish in South and Latin America.  but it’s slightly enigmatic in that the fish is neither cooked in any kind of real sense, nor raw like sushi/sashimi.

Instead, the fish is marinated in lime juice with some garlic, onion and chilli added and it ‘cooks’ in the acidity of the lime juice.  It’s a kind of South American smoked salmon but instead of smoking the raw fish,  it’s marinated.

But this ‘cooking’ process is where the similarity ends because while smoking also preserves the fish and gives it a longer life, albeit in the fridge, marinating in lime juice does not and so ceviche must be made fresh every time you want to use it and consumed within 24 hours of making.

Which means that if I make it tonight and leave it to marinate in the fridge overnight it’s OK to eat any time tomorrow, but not thereafter.  Leave it in the fridge for another day and you’ll be hard put to open your fridge door for the smell!

So, because I had had and liked ceviche, it had been on my cooking ‘hit-list’ for some time but I’d never quite got round to it, so it seemed to be a good time to try.

It is traditionally and classically made (in Panama, at any rate) with sea bass (‘corvina’ in Spanish) but can of course be made with any good quality fresh, raw fish as in the Tuna Ceviche at the Gaucho restaurant which started this whole thing off.

It proved remarkably simple using a very sharp knife to slice some fresh sea bass very thinly and we all liked it so much that we elevated it to our starter for Christmas Day.

On that occasion it was served with a really lovely salad/salsa made with finely diced avocado and cucumber, which, as it happens, makes a very good vegetarian alternative to the ceviche.  As it is also dressed with lime juice, it goes remarkably well with the ceviche. 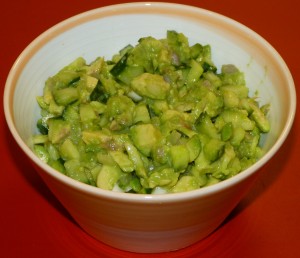