The hardest part of doing anything is usually starting it – knowing how to get going.  Once that’s done, it’s generally pretty straightforward, but with regards to kicking it off, as the great bard once said, ‘Aye, there’s the rub’.

Another famous, oft-quoted wordsmith (among other things), Mao Tse Tung, famously said ‘A journey of a thousand miles begins with a single step’, which I suppose is fine if you’re going for a walk (albeit a very long one), but doesn’t appear to help much in starting to write something in a way one’s never tried before (i.e. this blog!).

But anyway, in exploring the issues in relation to getting this off the ground, I have effectively done so, but only in a modest way – in terms of a journey of a thousand miles, perhaps only halfway up the garden path, perhaps not the best analogy.

Which brings me to cooked chicken, or to be more precise, left-over roast chicken – something a great many families must surely have on a Monday.  The problem with a chicken is of course that the poor thing doesn’t amount to much to start with, so not much chance of doing an awful lot with the remains of a decent Sunday lunch.

But let me introduce Stockmeyer.  One day a number of years ago while perusing the shelves in my local Waitrose (‘Sad! Sad!’ I hear) I came across interestingly-shaped cans of soup.  They were kind of barrel-shaped with the swollen-waisted appearance of what we now recognise as a ‘traditional’ soup kettle.

As a Scot and so automatically a proponent of soups, I looked at the cans with interest.  There were a couple of varieties but the one that caught my eye was called ‘Chunky Potato Soup’.  When I tried it, I found it to be a thick, creamy, chicken-based potato soup with vegetables – heavenly!

Cheap they were not, but this soup became a regular part of my diet for a while until one day, horror of horrors, I went to top up my depleted supplies to find the supermarket shelf filled with something else.  Stockmeyer was gone.  It did pop up subsequently in a couple of other supermarkets, albeit briefly, and then nothing nowhere – it was gone, verschwunden! However, much as it was to my taste, it is of course entirely possible that I was the only person buying it – or at least in a sufficiently small minority to remove the justification for any supermarket stocking it.

Not to be defeated, I decided to have a go at making it to see if I could get even close to replicating its creamy sensuousness. It didn’t take long to get on top of it and I reckon that what I now make would stand up well to the original.

And this is where the left-over chicken comes in.  You don’t need lots of meat, just the carcase to boil up to make the soup base, and then whatever oddments of chicken you can glean from it.  At a push, use chicken bouillon.

It’s anything but difficult, doesn’t take a long time to put together and, served with some crusty bread, provides a wonderfully nourishing, comfort-filled, cheap-as-chips, one-pot feast for the family.

Go on, give it a try 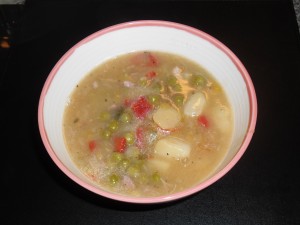 One thought on “We’re off (but not to see the wizard, one of which I could use right now)”