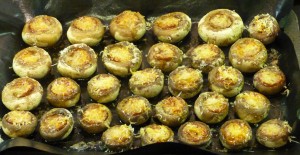 Whoever said ‘Life’s too short to stuff a mushroom” had obviously never tried stuffing them this way.

The Spanish have many ways of preparing mushrooms but this has to be one of the best, not to mention easiest.  Serve them as part of a tapas meal, as a starter, or as a canapé at a party, or just sit and munch them with a glass of wine, but make lots as they rapidly become addictive.

Be careful as you bite into them though – if you’ve drizzled olive oil over them properly, there’s likely to be an explosion of deliciously oily juices which just might leave your shirt/top heading for the washing basket.  But don’t NOT eat them because of that – just do it carefully in the knowledge that it may very well happen, so don’t sink your teeth into them until they are well and truly  ensconced inside your mouth.

Life may well be too short for some things but never for stuffing mushrooms this way!