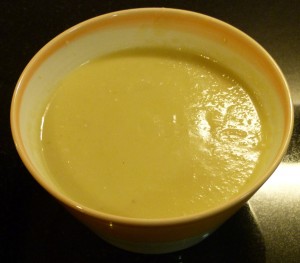 Jeanne Bécu, Comtesse (known as Madame) DuBarry was a French courtesan (posh name for prostitute) and mistress of King Louis XV.  She died on the guillotine in 1793 during the Reign of Terror.

Apart from that little historical note, she was known to be inordinately fond of cauliflower and would consume it with every meal if possible.  She would only eat one soup (guess which one!) and became quite irascible if a meal did not start with it.

I came across this soup in one of the ‘Supersizer’ programs featuring Giles Coren and Sue Perkins in which they examined the food and eating habits of the French Revolution.  Other programs in the series have featured roman Times, Medieval and Tudor England, the Restoration, Regency and Victorian Times, as well as the 20s, 50s, 70s and 80s.    Apart from being enormously informative, the programs are also very funny.

As soon as I saw this sleek, velvety, creamy soup being served up at one of the meals in the program, I knew I would have to have a go at it, and, remarkably, it proved to be incredibly simple with only a few ingredients.  What I like about it is that it achieves the heavenly consistency of a potato-based soup without a spud in sight, meaning (I presume) far fewer carbohydrates.

It is like eating silk, velvet or some indefinable combination of the two.  Enjoy it on its own or garnish with some reserved cauliflower florets, crispy fried chorizo, or sautéed prawns/crayfish.  Yum!